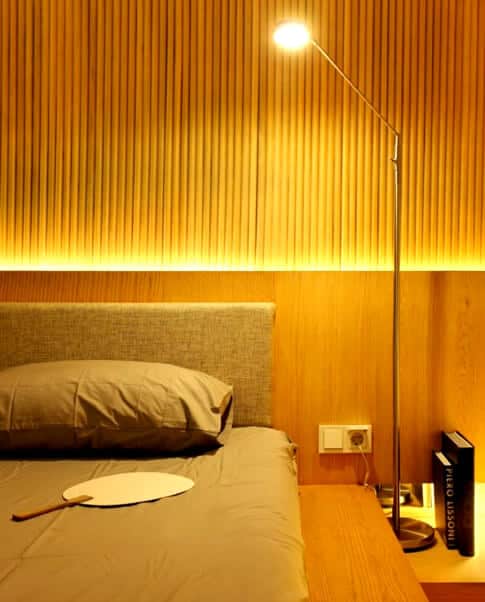 The color temperature of light is measured in degrees Kelvin. Lower-temperature white LEDs (around 2,000-4,000 K) are warm (yellowish white) like incandescent bulbs. White LEDs with higher color temperatures (above 5,000 K) are cool (blueish white). Whether warm or cool light is desirable is a matter of preference, but many people find warmer tints of white easier on the eyes and more relaxing.

Engineers are able to finely tune the color temperature of LEDs, so LEDs that closely resemble the warm color of incandescent bulbs are widely available. The character of the light isn’t exactly the same—LEDs appear more direct and pure—but LEDs cost less to operate, last longer, and run cooler than traditional bulbs. Remember also, that you can now also purchase warm LED bulbs that replace standard incandescent bulbs.

If you haven’t tried warm white LED light, check out the products below. We’ve found a handful of warm white LED lamps of different shapes and sizes. All of our picks are a great way to explore this energy-efficient, highly-useful technology:

Koncept manufactures a line of LED floor and desk lamps with highly-rated performance and elegant designs. The Z-Bar is a desk lamp housing six warm white (3,200-3,700 K) LEDs with four-step dimming. It casts an even, oval-shaped light pattern that can be directed with great flexibility thanks to this lamp’s three-joint construction. Each section pivots independently, permitting a maximum reach of over 40 inches. The Z-Bar can be mounted on its included 9”-diameter stand or clamped onto the edge of a desk or table. Its aluminum and plastic body is well-built and contemporary. Amazon reviewers give Z-Bars mostly four- and five-star reviews, praising the space-maximizing design and light quality. There are a few complaints about the price and the level of brightness (too low for some). Other comments we found in forums and on blogs are overwhelming positive, with authors such as Landis Carey of Re-Nest stating, “…after using the light on a daily basis over the past (almost) three years, the lamp has been tested, stressed and has proven to be long-lasting and durable.”

The i-Tower, one of Koncept’s floor-standing lamps, receives similar praise. Amazon customers rate it 4½ out of 5 stars, as do over 15 reviewers on LightingUniverse.com. And over 75 people weigh in on YLighting, where the i-Tower averages 5 of 5 stars. Much of the approbation given to the Z-Bar is given to the i-Tower: elegant design, wonderful light color, and a super-flexible adjustment system. The i-Tower employs the same six-LED design as the Z-Bar, with four-step dimming, aluminum and plastic construction, and oval light pattern. The i-Tower stands on a 9”-diameter base and its vertical arm extends 43.25”. The head will adjust anywhere from three to five feet above the floor. Both the i-Tower and Z-Bar are rated at 9.5 watts and 40,000 hours of operation before dimming to 70% of original brightness. Each carries a one-year warranty.

The LIM L Floor by Pablo Designs has a slim profile and a 3,300 K LED light array. Its aluminum body and light arm connect via a magnetic attachment system. This system allows for precise adjustments as well as the option of adding another light arm for increased illumination. Each attached arm moves vertically between 42 and 51 inches above the floor. The LIM L Floor has an on/off switch and two selectable levels of brightness. It won 2009 Best of Neocon Silver and an iF 2010 Product Design Award. Customers on YLighting give the LIM L Floor 4½ out of 5 stars, and two LightingUniverse.com customers give it an average of 5 stars. The strong points of this floor lamp are its sleek design and diffuse, warm light pattern. Its main drawback is its high cost. Pablo Designs also offers the LIM L Table ($300) for tabletop placement, as well as the LIM C Undersurface ($250), which mounts under a table to clear working space.

The Cree XLamp XR-E Warm White LED Lantern has over 20 customer reviews on Amazon, averaging 4½ out of 5 stars. There is also a lively discussion on CandlePowerForums (Favourlight Mini Lantern Disambiguation Guide) that points out the many positive attributes of this little lamp, which is sold under several different names by several different merchants. At the core of this lantern is a high-quality Cree XLamp XR-E warm white LED. This is a top-notch diode that exhibits high brightness (up to 110 lumens), high efficiency, and long lifespan. It is packaged within a compact (5″ H x 2″ W x 2.5″ D) and durable aluminum body with rubber end caps. It weighs just over seven ounces with the included three AA batteries. It is rated to run up to 24 hours in High output mode, 48 hours in Low mode, and 55 hours in Flash mode. Remove the top cap for flashlight functionality. This lantern comes with a carabiner.

1 thought on “LED Lamps That Glow With Warm White Light”