Bicycle touring is gaining in popularity across the U.S. with more car-free bike routes being completed each year. Cyclists who like the idea of long distance riding, but not the hassle of navigating through traffic and across busy roads on a bike can now plan an outing on one of these bike trails. 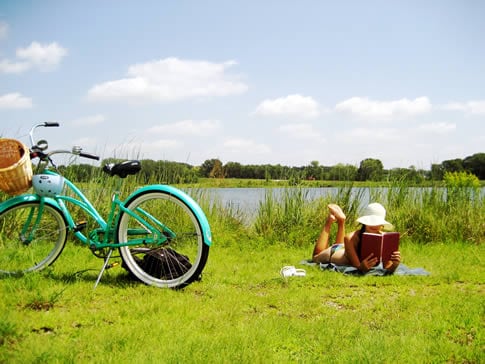 Thanks to abandoned railway lines and canal paths, the rails to trails movement in the U.S. has taken off. These trails offer gentle grades with beautiful scenery that you couldn’t see by car as they pass through towns that are now being revitalized due to bicycle tourism. Many states are working on building a network of bike routes to provide more continuous car-free cycling. Here is a sampling of the longest bike routes in the U.S.

A cyclist could ride from Washington D.C to Pittsburgh, PA without encountering one car along the way. The 150-mile Great Allegheny Passage (GAP) runs from Pittsburgh, Pennsylvania to Cumberland, Maryland where it meets up with the C&O Canal Path for another 185 miles to the nation’s capitol. The GAP bike route is built on the abandoned lines of railroads, such as the Pittsburgh and Lake Erie and the Western Maryland Railroad, that helped shape this area of the U.S.  Though some sections may be more challenging to the beginning rider, the GAP trail is made of crushed limestone and follows a gentle grade despite crossing the Eastern Continental Divide. The steepest grade along the route is westbound from Cumberland to Deal at 1.75%.  Cyclists will find plenty of diversions along the way with trailside bed and breakfasts, cafes, campsites, and bike shops as well as opportunities for whitewater rafting and canoeing.

The Chesapeake & Ohio Canal began operation in 1831. Today the canal is virtually drained, but the towpath has been claimed as a National Historic Park and used as a bicycle and hiking trail. Evidence of the canal’s heyday can be found along the route with aqueducts, canal locks, and lock houses. Though the C&O route is generally level, the ride is more rough in comparison with the GAP trail and other rail trails. The towpath was built for mules after all, not trains. For more on the GAP trail, visit the Allegheny Trail Alliance and for more about the C&O Canal Towpath visit BikeWashington.org.

Currently, the longest rails to trails bike route in the U.S. is the Katy Trail which runs across most of Missouri from St. Louis to Clinton. Plans are in the works to extend the trail to a suburb of Kansas City. Cyclists can enjoy 237 miles of nicely maintained crushed limestone with loads of amenities and side trips along the way from wineries to cafes to bed and breakfasts. Shuttle services are available for one-way trips. Popular events are routinely scheduled along the Katy Trail including the popular Hermann Oktoberfest and scheduled group rides and cycling tours. Ideal for beginners and advanced cyclists alike, the Katy Trail is mostly flat with a gradual grade from Clinton to Sedalia. Much of the trail follows the Missouri River. For more visit BikeKatyTrail.com.

Though the John Wayne Pioneer Trail is the longest bike trail in Washington state at 145 miles, current indefinite tunnel closures have segmented the trail and made detours through towns- with cars. The 126-mile Olympic Discovery Trail serves as a western extension of the John Wayne Pioneer Trail beginning at Port Townsend and ending at the coastal town of La Push. Traveling between the Olympia Mountains and the Strait of Juan de Fuca, the trail uses historic corridors and trestles of the Chicago, Milwaukee, St. Paul and Pacific Railroad. Forty miles of the trail between Sequim and Port Angeles are paved while the rest is gravel. Plans to continue the paving project are underway. Besides taking in the breathtaking views, there are plenty of other excursions such as kayaking, white water rafting, and side trails for more cycling or mountain biking. The town of Port Angeles offers unique restaurants, shops, and wineries, and, yes, is a mecca for the Twilight fans. Check out the OlympicDiscoveryTrail.com for more information.

The Erie Canalway Trail runs along the towpaths of New York’s historic canals: Erie, Oswego, Cayuga-Seneca, and Champlain. When complete, the Erie Canalway Trail will be a continuous 365-mile car-free bike trail between Albany and Buffalo. The Erie Canalway National Heritage Corridor will eventually link with other trails to provide 524 miles of consecutive trail riding. With 75% of the trail now finished, the longest section is 114 miles from Buffalo to Newark on a combination surface of paved and crushed stone. The next longest section would be 86 miles from Albany to Little Falls just east of Utica. Towns along the Erie Canal are experiencing a renaissance thanks to the development of this trail. Historic sites, canal locks, parks, and restaurants are just a few of the side trips available along the route. Mostly flat, the trail suits all ability levels with a few rolling hills and a gradual climb west of Albany. For more visit the Erie Canalway and Parks and Trails NY.

With its’ rich railroad history, translating into abandoned rail corridors, the Midwest has a wealth of long distance car-free bike routes which is where the rails to trails movement began. The Cowboy Trail in Nebraska is just behind the Katy Trail with 195 miles currently open. Another 126 miles are under construction which will make for 321 miles of continuous trail meandering across the Nebraska prairie land. Near Valentine you can cross a 148-foot railroad bridge. The trail is named for the Cowboy line coined by the Chicago & Northwestern Railroad. Though paved in some sections, the Cowboy Trail is made mostly of crushed stone and well-maintained. Plenty of conveniences and bike support can be found along the route. To plan your trip visit BikeCowboyTrail.com.

For more information on traffic-free routes, see these books:

1 thought on “The Longest Car-Free Bicycle Routes In The U.S.”