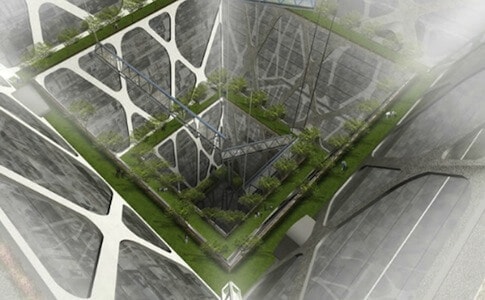 Mexico City is a sprawling city with nearly 9 million residents, and some of the most densely populated neighborhoods in the world.  So how could developers possibly squeeze a 65-story structure into the middle of the city’s historic district?  Instead of building upwards, a newly proposed design calls for building down into the ground, creating the world’s first “earthscraper”. 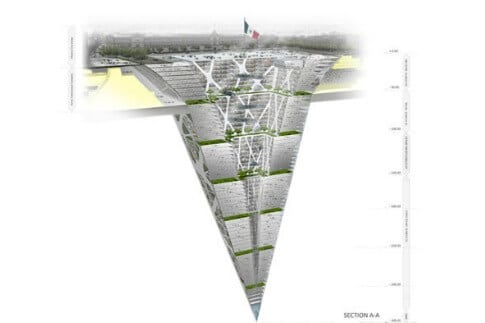 BNKR Arquitectura, the architecture firm behind the concept, sees the below-ground structure as a natural solution to the area’s need for more space.  Local laws restrict the removal of existing historic structures, and even if developers could find an empty lot, new buildings in the neighborhood are limited to 8 stories in height. 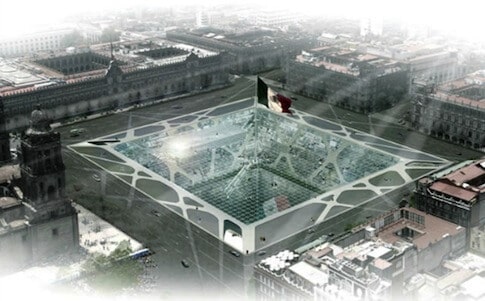 The designers envision a huge inverted pyramid that could house offices, homes, retail stores, and even special use spaces like museum galleries.  The main city square above, known as the “Zocalo”, would be preserved – its pavement replaced with transparent panels that would allow plenty to natural light into the massive atrium below. 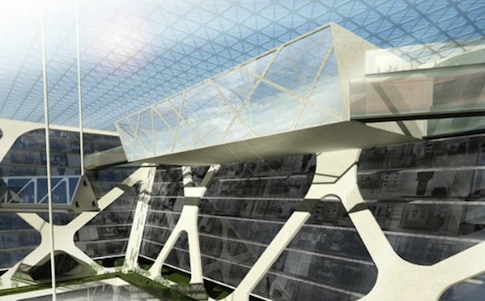 The concept is purely theoretical for now, but some of the design solutions proposed by BNKR architect Esteban Suarez are pretty clever.   For example, a series of  landscaped “earth lobbies” within the structure would help filter the air, fiber optic filaments could transmit natural light into enclosed areas, and groundwater surrounding the structure could be used to drive electricity-generating turbines.  Such a structure could also presumably take full advantage of geothermal heating and cooling; some of a skyscraper’s logistical challenges, like pumping water to the upper floors, could also take advantage of gravity to be much more energy-efficient.
Check out the BNKR Arquitectura website for more images and details about the proposed project.
(All images: BNKR Arquitectura)