Great ideas for sustainable development sometimes just remain abstract concepts – that is, until they’re put into practice where they can serve as a showcase for their real potential.  Such was the case with Chicago’s Center for Green Technology, the country’s first LEED Platinum municipal building – and an inspiration for subsequent development both in Chicago and nationwide. 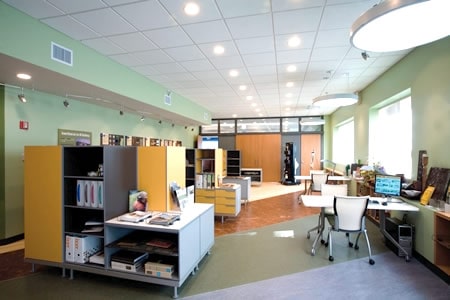 The Center for Green Technology is today a shining example of environmentally responsible building, but in the mid 1990s the site where it stands was a wasteland.  Sacramento Crushing, a construction-debris removal company, had let the property deteriorate into a 17-acre dump.  Illegally deposited rubble had risen into mounds as high as a seven-story building, until a court order put Chicago’s Department of the Environment in control of the property and the necessary cleanup.

The cleanup was no small task, but even the site preparation was done with sustainability in mind.  Over 600,000 tons of concrete waste was removed from the property, but much of that was recycled and used for other city projects.  In fact, the parking structure at Chicago’s landmark Millennium Park contains recycled concrete from the old Sacramento Crushing yard.

When architects Farr & Associates completed CCGT in 2002, many of the building’s features were truly groundbreaking.  The structure incorporates design elements like geothermal heating, recycled-paper ceiling tiles, and a naturalized detention basin to handle water runoff.  And the firms that do business inside the building were picked because their missions mirror that of the facility itself.  According to CCGT:

“To match the vision of the building, DOE selected tenants who are environmentally focused. Current tenants include Greencorps Chicago, the city’s community landscaping and job training program, WRD Environmental, an ecological landscape design/build firm, and Whitney Wood Works, a business that specializes in non-toxic, earth-friendly cabinetry and woodworking for both residential and commercial clients.”

The Center for Green Technology also offers a range of sustainable building resources for both individuals and large-scale developers.  The Green Building Resource Center and the “GreenTech U” program help educate homeowners and builders about topics ranging from interior design and gardening to architecture and construction management.

Since the CCGT opened its doors, and largely thanks to the example it set, Chicago has become a model of sustainable urban design.  The city currently has 124 LEED-certified buildings, more than any other city in the country, including 32 municipal facilities (since 2004 all new and renovated city buildings have been built to LEED standards).  Chicago also leads the nation in green rooftops with over 4 million square feet of green roof space.  And other city projects like the Green Alley Initiative have further improved Chicago’s sustainability and quality of life for its residents.

The CCGT and more recent city developments have been great examples of “sustainability that makes sense” – they have encouraged many developers to pursue sustainable designs that make good economic sense as well as being easier on the environment.  As “green” building practices have become commonplace in Chicago, the construction costs of LEED-certified buildings have dropped to a level competitive with older non-LEED approaches – and reduced operation costs add far more substantial savings.  This shift has also created a great environment for startup technologies and private developers, like urban wind-turbine designer Aerotechture and large-scale commercial projects like the proposed Clean Technology Tower.

The Center for Green Technology is open to the public Monday-Saturday, and tours are available.