The world’s largest wind turbine is now the Enercon E-126. This turbine has a rotor diameter of 126 meters (413 feet). The E-126 is a more sophisticated version of the E-112, formerly the world’s largest wind turbine and rated at 6 megawatts. This new turbine is officially rated at 6 megawatts too, but will most likely produce 7+ megawatts (or 20 million kilowatt hours per year). That’s enough to power about 5,000 households of four in Europe. A quick US calculation would be 938 kwh per home per month, 12 months, that’s 11,256 kwh per year per house. That’s 1776 American homes on one wind turbine.

The turbine being installed in Emden, Germany by Enercon. They will be testing several types of storage systems in combination with the multi-megawatt wind turbines. 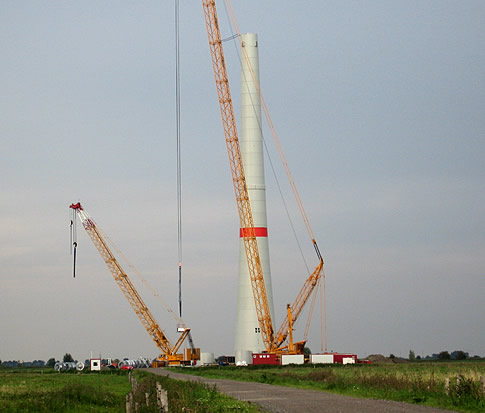 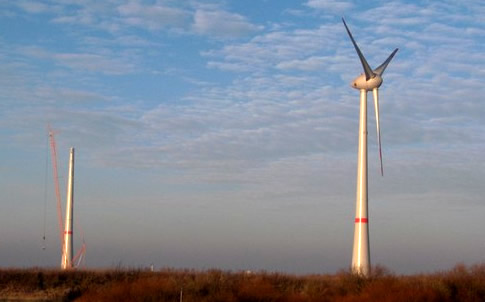 These turbines are equipped with a number of new features: an optimized blade design with a spoiler extending down to the hub, and a pre-cast concrete base. Due to the elevated hub height and the new blade profile, the performance of the E-126 is expected to by far surpass that of the E-112. 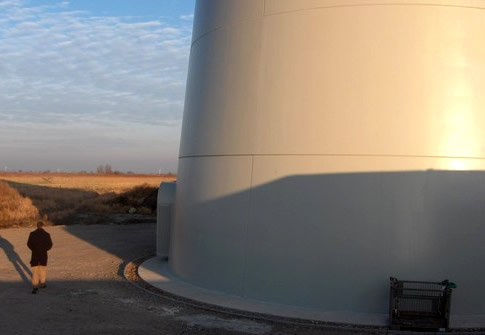 WiredForStereo of The Way explains the operation of these new turbines:

[The E-126]… has no gearbox attaching the turbine blades to the generator, in fact, the generator is housed just at the widest part of the nose cone, it takes up the entire width of the nacelle to generate power more efficiently, and provide longer service life with less wear.

Also like small turbines, these have inverters instead of synchronous generators, that is to say, a separate controller that converts the wild AC generated into something the grid can use. This means the rotor can run at more optimum and varied speeds.

Again like small turbines, this one does not shut right off at a predetermined speed due to gusts or just very high wind speeds. It simply throttles down by turning the blades slightly away from the wind so as to continue to generate power though at a lower production rate. Then the instant the wind is more favorable, it starts back up again. Many smaller wind turbines do something similar except have no blade pitch control, they use a technique called something like “side furling” where the whole machine, excepting the tail, turns “sideways” to catch less wind but continue operating.

Money, why else? Big things are cheaper per unit production. If you have 3 2 MW generators, you have to have three (at least) cranes to put them up, build three foundations, have to maintain three machines, and have three times the parts to fail. If you have one, it is larger and more expensive in itself to move, but not as expensive as having to move three smaller ones.

I don’t understand how people can be so concerned about birds becoming mush with modern wind turbines, especially ones this big. It only turns at 12 rpms. That means it takes five seconds to complete one revolution. That is slow but this is much bigger and easy to see compared to the whirring blades of old. The Altamont Pass turbines gave wind turbines such a bad name because they were built in the middle of the natural habitat of rare birds, the turbines were the small fast spinning type, and they were built using lattice towers, the kind birds love to nest in. These are slowly being replaced and all of the new ones are of the slower rotating kind. In the end, it comes down to this. Stationary buildings and moving cars kill literally millions of times more birds than wind turbines. And things like the Exxon Valdez spill kill millions of everything. So let’s go with the best option. 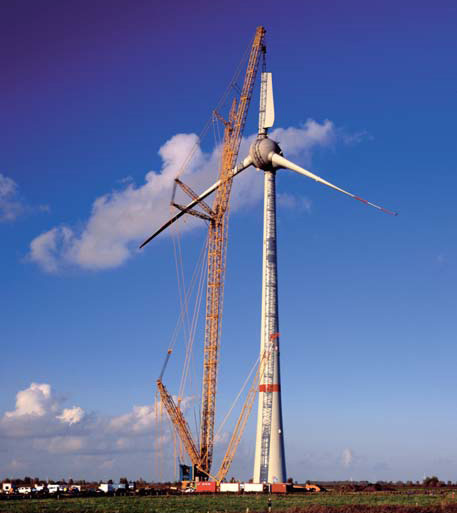 A graph of the World’s Largest Wind Turbines.