The East Coast Greenway is an urban network of trails stretching 3,000 miles from Key West, Florida to Calais, Maine on the Canadian border. Founded in 1991 by a group of trail advocates, the East Coast Greenway (ECG) began as a vision to provide cyclists and pedestrians with a safe and continuous, traffic-free route connecting 25 major cities along the Eastern seaboard. Today, 25% of the route is complete with car-free trails. The remaining 75% travels on roads that have been studied for safety and, in many cases, use bike lanes or wide shoulders.

If we continue to grow at this quick pace, our East Coast Greenway will be safe and accessible to millions of Americans within a few years.

No doubt an ambitious project, the ECG is on the path to turning a dream into a reality and proving that communities are prepared to embrace this national resource. Continued development stimulates local economies and provides green jobs along the route. Other benefits include low-cost transportation, connecting people with local business, reducing traffic congestion, diminishing dependence on fossil fuels, and promoting health and well-being. It’s been designated by some users as the urban version of the Appalachian Trail. 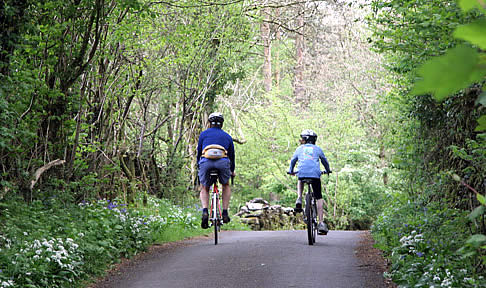 Commuters up and down the east coast use segments of the Greenway in their daily commute, while others take advantage of the recreational opportunities. Many cyclists have biked the entire route. Utilizing rail trails, canal towpaths, current greenways, and waterfront pathways, the East Coast Greenway is mostly paved, though some sections contain crushed stone surfaces. It is suitable for all muscle-powered transportation: cycling, walking, and wheel chairs. Some sections of the route allow in-line skaters and equestrians.