For bicycle commuters, continuing to pedal through the winter months can be a daunting task, especially if one lives in a northern city. Often the decision for winter bicycle commuting comes down to perspective: Is cycling a sport or a viable form of transportation that offers a multitude of advantages such as saving money and improving the health of the cyclist and the environment? In order for bicycling to be respected as sustainable transportation, the surrounding community must be supportive of cyclists year-round. This includes city maintenance of bike lanes and paths during winter as well as supportive bicycle initiatives. It can be done. In Copenhagen, where dedicated snow plows clear the bike lanes, 80% of cyclists continue through the winter. Here are five cities in the U.S. that are supporting bicycle commuting through the winter. 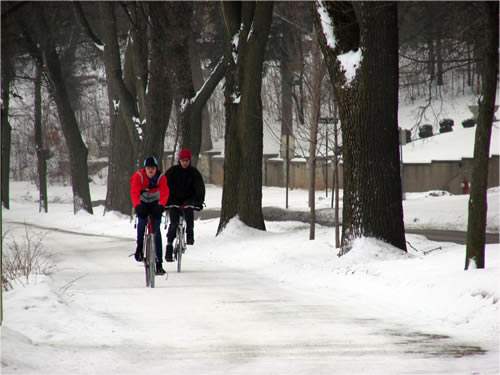 What makes Boulder one of the most bike-friendly cities in the country is partly due to the city’s commitment to winter bike commuters. While Boulder is no stranger to bike commuting it’s also no stranger to snowy weather, which makes most Coloradans dedicated to maintaining an active lifestyle despite weather challenges. Last January, Boulder held its’ third annual Winter Bike to Work Day. The over-60 miles of paved multi-use paths get plowed before more than an inch of snow accumulates using separate snow removal crews, while the on-road bike lanes are plowed right along with the streets. Many Boulder cyclists say their bicycles are faster than getting across town in a car held up by winter weather and traffic. Though Boulder does not have commuter rail, bike racks are available on the city bus at a first come first serve basis. 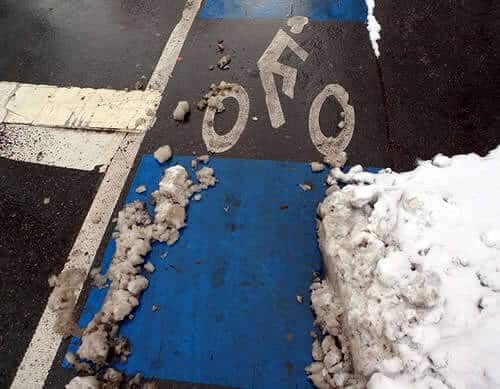 Heralded by Bicycling Magazine as America’s most bike-friendly city, Minneapolis has seen success for its’ initiative in reducing car dependence. While the number of bicycle commuters do decline in the frigid winter months, the city estimates that 36 percent of bike commuters still pedal on clear winter days and a bold 20 percent brave the harsher conditions that tend to plague the area. Perhaps it’s the inspiration cyclists get from seeing others riding in the winter that will keep these numbers rising.

With over 60 miles of off-road trails, the city is speedy at removing snow from these areas, typically withing 24 hours. According to Minneapolis cyclists, the 46 miles of on-road bike lanes become a bit more challenging to keep clear of the piling snow as well as parked cars during the winter months. Cyclists can take advantage of Minneapolis’ Metro Transit System incorporating light rail, commuter rail, and bus service all equipped with bike racks. For commuters who travel by bike 3 or more days a week, the transit system offers a free Guaranteed Ride Home Program good for use up to 4 times a year for emergencies such as snowstorms. 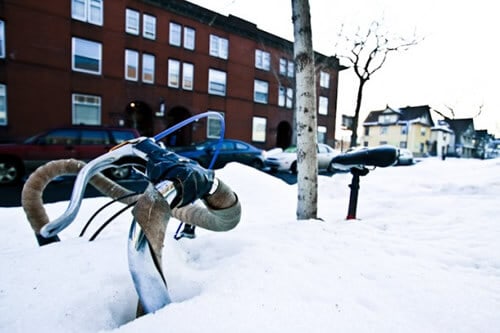 Madison’s successful bicycle infrastructure has made getting around town by bike such a feasible venture that many Madison bike commuters continue on through the winter months. Currently, the town boasts 87 miles of bike lanes and 43 miles of off-road bike paths which are quickly cleared of snow by the parks department. Many Madison cyclists claim the bike paths are often cleared before the streets. Bike Madison, the city’s website devoted exclusively for bicycling, is a great resource and support for year-round bike commuters.  All Madison Metro buses are equipped with bike racks available on a first come first serve basis. Bike Winter is a volunteer organization that hosts winter cycling events in Madison in an effort to inspire and educate. 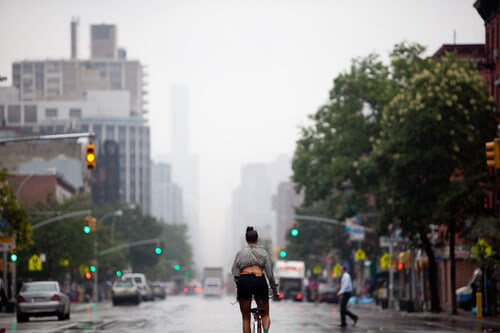 The New York City Parks Department does such a expeditious job of clearing the growing number of bike paths and greenways that last winter it added to the already contentious bike lane controversy when many of the bike paths were cleared of snow and ice before the roads. For New York to compete with world-class bicycling cities like Copenhagen, this support of winter cycling will need to continue as the more cyclists are out there in the winter, the more citizens will be aware of cyclists on the road. The New York City Department of Transportation has done an excellent job of adding bicycle parking, including the famous David Byrne bike racks, and is in the process of building 36 sheltered bike racks that hold 8 bikes each. Their website includes a helpful map showing where these bike racks are located. With NYC gearing up to unleash its’ New York City Bike Share in 2012, winter cycling in New York could see a surge as the program is slated to run 365 days a year. 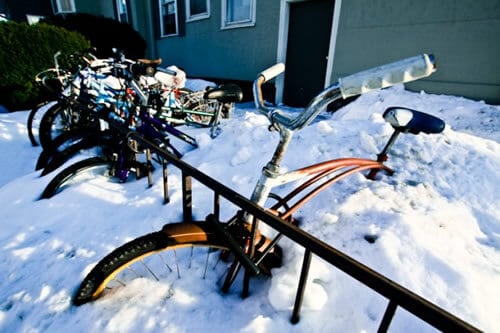 Recently awarded the silver status as a Bicycle-Friendly Community by the League of American Bicyclists, Burlington, Vermont can be buried in snow from October to April as the winds whip off Lake Champlain. This doesn’t stop the tenacious souls who choose a bicycle as their primary mode of transportation through the harsh winters of Burlington. Many University of Vermont students find it easier and much less expensive to get around town sporting fat tires and extra layers as they pedal through the elements. With Burlington devoted to building a strong bicycle network as well as encouraging residents to lead a sustainable lifestyle, winter cycling isn’t such a crazy notion.