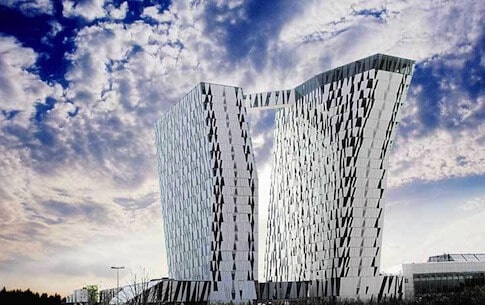 Denmark’s newly opened Bella Sky Comwell Hotel is the largest hotel in Scandanavia, but its size is outshined by its unique, environmentally friendly design and architecture.  Located in Copenhagen’s leafy Ørestaden district, the hotel creates a striking impression both inside and out.

3XN, the architecture firm behind the project, opted for the dual-tower design to provide plenty of square footage without needing to build higher, since the hotel is located near a major airport.  And the Bella Sky Comwell, which just opened in March, certainly isn’t short on space – boasting 814 guest rooms, 30 conference rooms, multiple bars & restaurants, and a spa. 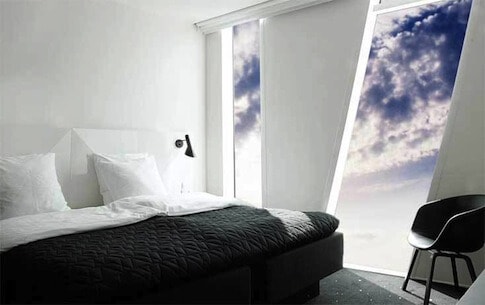 The unusual lines of the structure aren’t just for show, either.  The angular pattern of windows is actually part of the structure’s energy-efficient design.  According to Kim Herforth Nielsen, 3XN’s Creative Director,

“Designing a sustainable building was also vital to us. This includes insulating the building from solar heat and heat loss, which meant that the facade could not be comprised of more than 50% glass. The facade’s pattern provides this insulating effect. And the pattern, which is formed by diagonal and vertical lines, enhances the building’s look by following the turning of the towers.”

Many of the indoor design elements are also functional as well as aesthetic.  For example, a huge vertical garden wall within the lobby provides air filtration and moisture control as well as decoration, and the centerpiece chandelier is comprised of 7,000 ultra-efficient LEDs. 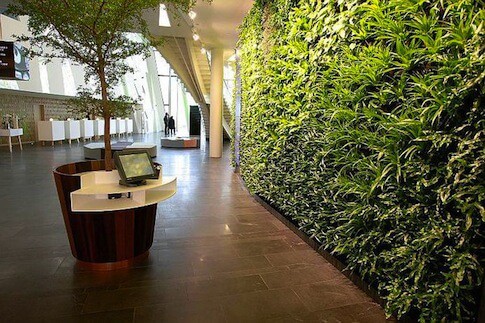 The designers even made sure that getting to the hotel can be an exercise in eco-friendliness.  The lobby is just steps from Copenhagen’s Metro public transit system, and to top it off, the hotel provides plug-in charging stations for guests who arrive in electric vehicles.

Learn more about the unique features of this hotel (or book a room) at the Bella Sky Comwell website.