Family cycling can be a fun and rewarding experience, especially for cyclists who want to share the joy of bicycling with their children. However, there are a few years, typically between the ages of 4 and 9 when family cycling becomes challenging for both parent and child. Even though they’ve outgrown the child bike seat and are riding on their own, it will still be a few years before they’re able to handle a long ride with Mom and Dad. Here are a few products available that help ease this transition without giving up on the family bike ride.

The FollowMe is a device that connects the adult bike with the kids’ bike, turning it into a tandem bicycle. Once the initial set-up is complete, it is simple to take the kids’ bike on and off even during a ride and without tools, so the child can ride solo for a while, then re-attach if the child gets tired or for going through traffic. 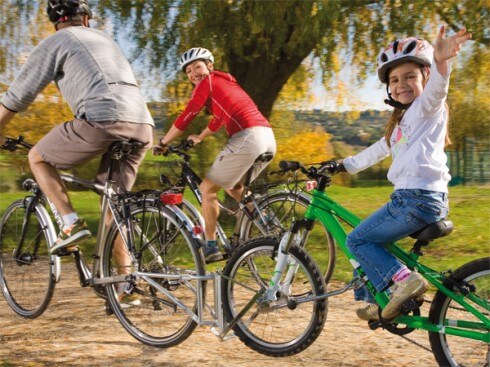 If the child isn’t attached, the FollowMe folds up over the rear wheel for easy and unnoticeable stowaway. The FollowMe is different from a trailer bike in that you can use the child’s own bike and also still have the ability to connect a child seat or panniers.

The 2 point support at hub level gives a more stable and secure ride than traditional trailer bikes that attach to the seat tube. The FollowMe unit weighs a bit over 8 pounds and is adjustable for kids’ bikes from 12″ to 20″, typically ages 3 to 9. It is a bit pricey at $399, though the safety, convenience and the ability to grow with the child adds to its’ value. FollowMe is based in Switzerland and is sold almost exclusively in Europe, though we did find it at Clever Cycles in Portland, Oregon.

The Weehoo I-Go is similar to a recumbent bike and allows the child to ride in safety and comfort with the opportunity to pedal. This would be a great option for long rides, especially if your child tends to fall asleep easy. The seat slides forward and back, adjusting as your child grows from ages 2-9. It includes a 3-point harness system, grips for extra leverage while pedaling, and panniers for storage space. Based in the U.S., Weehoo is available at many bikes shops across North America, retailing for $439.

The Weehoo I-Go is available at Amazon.

The Adams Trail-A-Bike is the original bike trailer system offering a variety of styles and options including the Original Shifter Seven which introduces the young rider to the wonderful world of shifting with a Shimano 7 speed drivetrain. All of the trail-a-bikes feature a folding design for easy transport and storage. Trail-a-bikes are recommended for kids ages 4 to 6, though they do offer the FolderTwentyFour with a 24″ wheel for ages 7-10. Ranging in price from $200 to over $500 for the tandem model, they are a more reasonable priced option, though won’t last as many years as the FollowMe or the Weehoo.

The Adams Trail-A-Bike Original Shifter Seven is available on Amazon.

Another option for family cycling is to use a traditional tandem bike fashioned with a kidback, which is an adjustable bottom bracket that holds another set of pedals higher up on the seat tube so that a child can reach. Kidbacks were popular in the 70s and are beginning to make a comeback. Many tandem bike retailers sell kidback conversion kits. Read more about this option at Sheldon Brown.

1 thought on “Family Cycling: A Review Of Trailer Bikes For Kids”