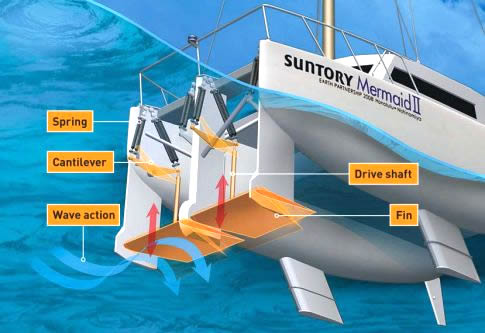 Ken-ichi Horie, a 69 year old Japanese sailor, is planning a solo 4,350 mile trip from Hawaii to Japan using an innovative wave powered boat. If successful, the trip would earn him a Guinness record while simultaneously proving the viability of wave powered propulsion.

His boat, the Suntory Mermaid II, turns wave energy into thrust using two fins mounted beneath the bow. These fins move up and down with the waves and use them to generate “kicks” that propel the boat forward. Another green element of the journey: all of the radios and electrical equipment are solar powered.

The fins will only garner a top speed of 5 knots, so his trip will take about three months. 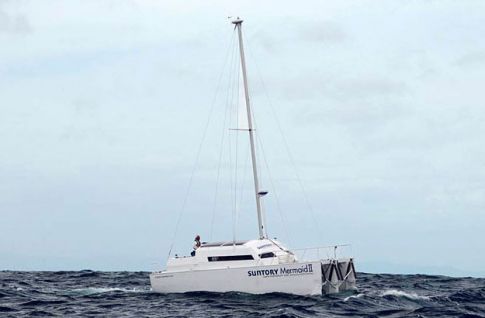 From the Popular Science article:

This month, 69-year-old Japanese sailor Ken-ichi Horie will attempt to captain the world’s most advanced wave-powered boat 4,350 miles from Hawaii to Japan. If all goes as planned, he’ll set the first Guinness world record for the longest distance traveled by a wave-powered boat and, along the way, show off the greenest nautical propulsion system since the sail.

At the heart of the record-setting bid is the Suntory Mermaid II, a three-ton catamaran made of recycled aluminum alloy that turns wave energy into thrust. Two fins mounted side by side beneath the bow move up and down with the incoming waves and generate dolphin-like kicks that propel the boat forward. “Waves are a negative factor for a ship—they slow it down,” says Yutaka Terao, an engineering professor at Tokai University in Japan who designed the boat’s propulsion system. “But the Suntory can transform wave energy into propulsive power regardless of where the wave comes from.”

Horie’s latest adventure builds on a storied career of eco-sailing. In 1993 he pedaled a boat 4,660 miles, from Hawaii to Okinawa, setting a world record for the longest distance traveled by a pedal-powered boat.

n 1996 he set the world record for the fastest crossing of the Pacific Ocean in a solar-powered boat. And in 1999, he made a solo trip across the Pacific in a catamaran made from recycled beer barrels.

With a maximum speed of five knots, the Suntory will take two to three months to complete a voyage that diesel-powered craft accomplish in just one. But speed is not the point. The voyage aims to prove that wave propulsion can work under real-world conditions, opening up the technology for commercial applications such as cargo shipping. “Oil is a limited power source,” Horie says, “but there is no limit to waves.”