We just featured the largest wind turbine in the world, now here’s something at the opposite end of the spectrum: a household wind turbine. In the last few years, we’ve seen a lot of mini-wind turbines that haven’t turned out to be very useful. But the Windspire turbine from Mariah Power sounds interesting. The Windspire has a propeller-free vertical-axis design, and is expected to produce about 1800 kilowatt hours per year in 11 mph average wind conditions. That amount of wind power is roughly 25% of a typical household’s energy (or much more if you are particularly energy efficient).

The Windspire is 30 feet tall with a two foot radius, sized below typical residential zoning restrictions. Guidelines for installation sites are generally half an acre of land and relatively windy locations. The Winspire has just passed the ETL safety certification, which means it’s ready to go to market. It is expected to be released this spring, and priced at $3,995. 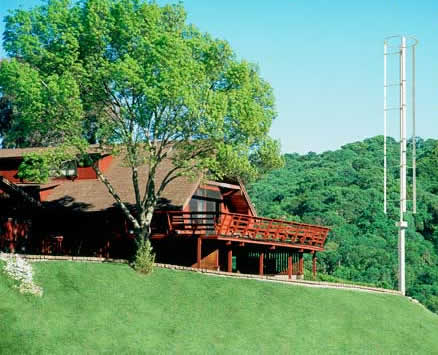 Windspire features a fully integrated, plug ‘n produce design, including a high efficiency generator, integrated inverter, and wireless performance monitor. The integrated design allows for simple installation (estimated to cost around $1,000). It incorporates a slow speed giromill rotor for virtually silent operation and improved safety and durability. It connects to the household power supply, offsetting electricity use and at times running the electricity meter backwards.

You can also get this wind turbine painted any color you like, to match the surroundings, to stand out as piece of functional art.