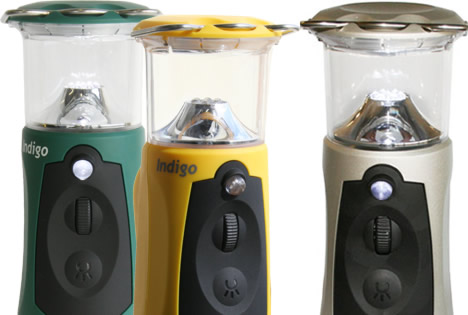 Here are some lanterns that can be charged via the sun or via human power. Freeplay’s Indigo is a well-designed, rugged lantern. It’s one of those products that, when you hold it, feels extremely solid. This lantern shines with a cluster of seven bright LED bulbs. It won’t brighten a room, but at full power, it provides good illumination. It has a built-in Ni-MH rechargeable battery. The battery can be charged via two power sources — AC  power, and by hand cranking it. A 60 second wind will provide up to 2 hours of light in the lowest setting or 5 minutes at maximum brightness.

The lantern has a dimmer, which reduces the output to that of nightlight. It also has a task light, which is a thin beam that’s angled downward, making it more convenient to use for reading. It won’t replace a good flashlight, but can be used in a pinch. Weighing just under one pound, the Indigo is easy to transport and provides up to 70 hours of light on the lowest setting with a fully charged battery. Freeplay’s Indigo is available from Amazon for about $35. 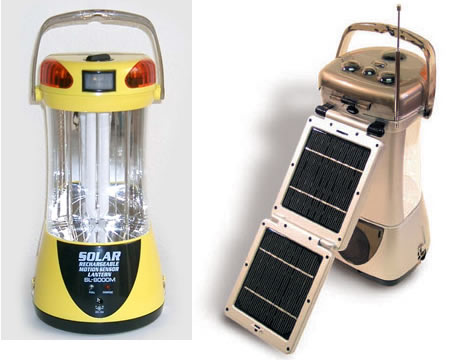 Here are two lanterns by Global Marketing Technologies that can be charged via built-in solar power, AC power or DC power. The yellow lantern is a “motion activated” solar lantern, and the silver one incorporates an AM/FM radio with weather channels. They both use 9W fluorescent bulbs for illumination, and have a built-in rechargeable 6V seal lead acid battery. But note, because the solar panels are so compact, it takes about 8 hours of charging in bright sunlight to get 3 hours of power.

Another solar lantern is the Wagan — it’s less powerful but less expensive than the lantern above, and it is available from Amazon

Check out this smaller Wind-Up Tent Lantern for camping.

4 thoughts on “Wind-Up and Solar-Powered Lanterns”