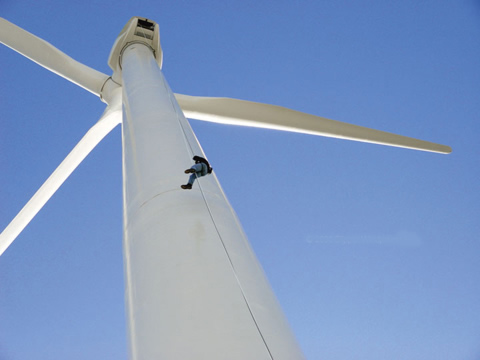 The Queen is investing in the world’s largest wind turbine. It’s a prototype of a new line of wind turbines called “The Britannia” which will be produced by Clipper Windpower, based in California. The turbine tower stands about 328 feet, has a diameter of 492 feet, and can generate 7.5 megawatts. Currently, the largest installed wind turbine is the massive Enercon E-126, which is rated at 7 megawatts (see of our previous post here).

The sale was made to the British Crown Estate, which owns most of the seabed off Britain’s shores, regularly leases out its land to wind farm projects but has never invested in the turbines. The prototype turbine is part of Britain’s ambitious goal of generating 33 gigawatts of offshore wind energy by 2020.

This investment will allow The Crown Estate to gain firsthand knowledge of the challenges facing the development of wind turbines specialised for deep water marine deployment as the process of engaging industry to develop the next phase of offshore windfarms begins. If the industry is to reach the current delivery target of a total capacity of up to 33 GW by 2020, this kind of support and research will be invaluable.

In addition to a unique and diverse property portfolio, encompassing urban and rural estates, the marine interests of The Crown Estate include almost the entire UK territorial seabed out to 12 nautical miles and around 55 per cent of the UK’s coastal foreshore. In addition, The Crown Estate has the rights to lease seabed for the generation of renewable energy on the continental shelf within the Renewable Energy Zone which extends out to approximately 200 nautical miles.