My unwinking, analytical gaze of efficiency now turns to the toilet. Unfortunately, the design of the modern Western toilet is highly inefficient, in fact, it is so inefficient that it is actually harming our health. The modern toilet has only been around for about 150 years — the “porcelain throne” was created to “give dignity” to the water closet, rather than considering human physiology.

There are three fundamental problems with the Western toilet:

Squatting is the natural position for elimination — it makes the process easier and more complete. Two-thirds of the human race squat to answer the call of nature.

According to Jonathan Isbit, author of Nature Knows Best: The Health Benefits of the Natural Squatting Position, squatting prevents “fecal stagnation” which is a prime factor in colon cancer, appendicitis and inflammatory bowel disease (more details here). Virtually every physician and physiologist who has ever troubled to write on the subject agrees that the squatting position is the optimal position for elimination (for a survey of the research see The Bathroom by Alexander Kira). For example, F. A. Hornibrook, author of the “Culture of the Abdomen”, says that unfortunately “constipation has become a contentment in Western countries”.

Squat toilets are also easier to clean because they are simpler and there are not as many surfaces to clean.

Blue Earth Ceramics is the only manufacturer of squat toilets in the U.S.

Jonathan Isbit sells a device called Nature’s Platform that allows you to squat on a conventional toilet. His description is as follows: “It has a five-degree slope so that you don’t have to balance on the balls of your feet. It folds up in 3 seconds so other family members are not inconvenienced. It is lightweight but still strong and stable enough to hold a 300-pound man or woman.” 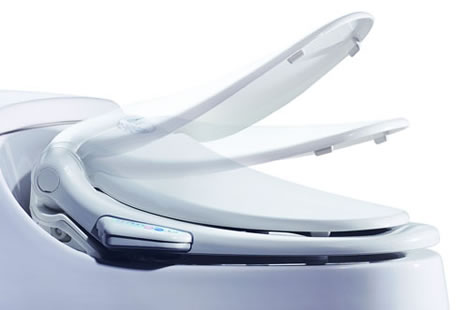 Toilet paper an ineffectual way of cleaning one’s posterior. Not to get too graphic — but it just smears more than cleans. Using water for cleaning is much more effective, and it has a therapeutic effect on damaged skin (it’s gentle on rashes or hemorrhoids).

The use of toilet paper also requires enormous resources. We use 36.5 billion rolls of toilet paper in the U.S. each year, this represents at least 15 million trees pulped. This also involves 473,587,500,000 gallons of water to produce the paper and 253,000 tons of chlorine for bleaching purposes. The manufacturing process requires about 17.3 terawatts of electricity annually. Also, there is the energy and materials involved in packaging and transporting the toilet paper to households across the country.

Toilet paper also constitutes a significant load on the city sewer systems and water treatment plants. It is also often responsible for clogged pipes. In septic systems, the elimination of toilet paper would mean the septic tank would need to be emptied much less often.

Basically, the huge industry of producing toilet paper could be eliminated through the use of bidets. Instead of using toilet paper, a bidet cleans your posterior using a jet of water. Some bidets also provide an air-drying mechanism.

In Japan, high-tech bidets called Washlets are now the most popular electronic equipment being sold–60% of households have them installed. In Venezuela, they are found in approximately 90% of households.

Inexpensive bidets are available–you can find a $65 bidet seat that attaches to your toilet. This model uses no electricity or hot water. After using a bidet, most people find cold water is fine, and not particularly shocking to one’s rear. Occasionally, a few sheets of paper are needed to dry oneself. Many people say that even a bidet is unnecessary, they say a garden-type pump sprayer works best. Indeed, this method of washing is common in Asia. You can also find simple travel bidets for under $20.

This book is a good source of information on bidets: Everything There Is To Know, From The First and Only Book On The Bidet. The book discusses the different models of bidets, the health aspects, and ecological benefits.

The sewer systems we use today are entirely ineffectual and unnecessary. The primary flaw in our design is that we use freshwater to dispose of feces. This is perhaps the most ineffectual thing to do with human manure — it pollutes freshwater, and it requires municipalities to maintain extremely costly sewage treatment infrastructures. Even after treatment, sewage can still wreak havoc on rivers and groundwater. The most effective and straightforward thing to do with sewage is to compost it (or use it to produce fuel via biogas). It’s a valuable resource.

I’ve written about the benefits of composting toilets and buildings that are completely sewer-free. See also the Composting Toilet Systems Book and Humanure Handbook for more information.

Other good books on this topic:

Liquid Gold: The Lore and Logic of Using Urine To Grow Plants

51 thoughts on “The Three Fundamental Flaws Of The Modern Toilet”