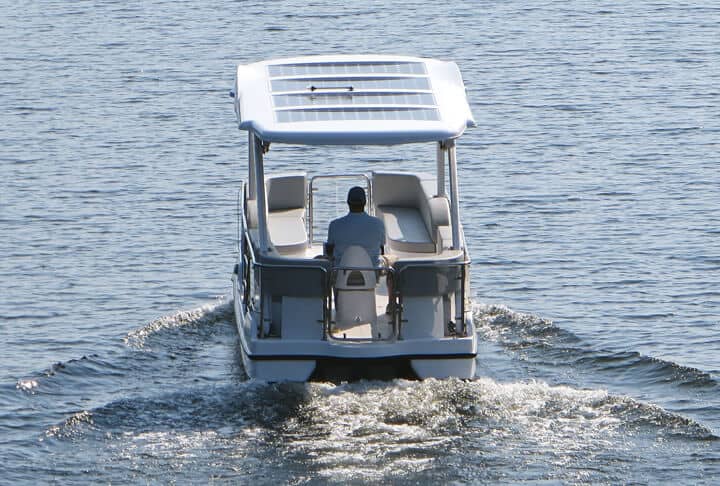 The Gisborne family has completed a 12-day trip on their solar-powered electric boat, the Loon. The Gisbornes travelled the Erie and Oswego canals for 12 days before reaching Albany, New York. Monte Gisborne, the captain, said this will mark the first time anyone has traveled an American canal system using solar electric energy as the primary fuel source.

The Tamarack Lake Electric Boat Company designed “The Loon” — it’s a pontoon boat with 738 watts of solar panels mounted on its cover, and a 30 mile range on its 48 Volt deep-cycle battery array. It has a top speed of a 5 MPH.

The boat is “solar-assisted” because it has a built-in battery charger that allows users to augment the solar energy input with electricity from the utility grid, usually from shore power available at marinas or dockside. Electric boats, unlike gas-powered boats, eliminate the discharge of hydrocarbons into waterways.

Monte Gisborne, in an interview, said this about the efficiency of the boat:

The primary consideration here is that internal combustion automobiles and boats, even in this advanced age of computers and emission controls, are horrendously inefficient. We just cannot seem to turn the energy available in a litre of gasoline as efficiently into mechanical energy as we can into heat.

The actual truth is that a 1969 Chris Craft boat with twin 454-cubic-inch engines (not uncommon on the waterways) is so horrendously inefficient that my boat costs only 1/150 of the fuel costs to run per km.

Generally, the solar panels provide you with about 16 km of free travel on a sunny day. For most customers, 16 km is ample and, even if you travelled 32 km one day, as long as you don’t use it the next day, you’re fine and the batteries will catch up.

Generally, these are weekend toys that soak up the sun all week long, gathering a charge for the weekend.

Via: Groovy Green and the Globe and Mail