Utility bikes or “work bikes” are very efficient vehicles for transporting cargo (and children too). They are quite popular in bike-friendly places like Amsterdam, Copenhagen and China. Bikes can tow a remarkable amount of weight. Loads in excess of 880 pounds (400 kilograms) have been hauled behind bikes along flat surfaces. Generally though, 300 pounds (140 kilograms) is considered the upper threshold for hauling. Full-sized refrigerators or couches that won’t fit in a car can comfortably be pulled behind a bicycle with the right kind of trailer.

Let’s take a look at the various types of bike trailers and utility bikes available:

For small-sized loads you can try something like a B.O.B trailer, which is a single-wheeled trailer that attached to the back of most bikes (see picture above). These are practical trailers that are good for carrying light to medium-weight loads (up to 77 pounds or 35 kilograms). Having only one wheel reduces resistance and allows for narrower riding surfaces, so they are a popular choice for long-distance cyclists. When overloaded the single wheel trailer transfers too much weight to the bicycle and riding becomes unstable. Additionally, heavily loaded trailers can cause frame or hub damage to your bicycle due to the torsion forces transferred through the unidirectional pivoting hitch. 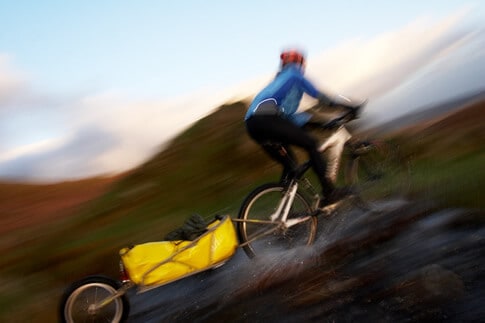 Two wheeled trailers have the potential to carry more weight because they create a more stable platform, and the weight can be distributed right over the trailer wheels, taking the burden off your bicycle. Two wheelers also utilize multi-directional pivoting hitches (since they don’t rely on the bike to keep them upright) which don’t transfer torque through to your bike frame. Some examples of two-wheeled trailers are the Burley Nomad, the Carry Freedom Y-Frame, the Cycle Tote and Tony’s Trailers.

There are also two-wheeled trailers available which can carry loads of 260 pounds (120 kg) or more. A company that makes heavy-duty carry bikes is Bikes At Work.

An Xtracycle is a frame extender that moves your rear wheel further back and increases the stowage capacity of your bicycle. It also comes with racks and straps for securing the extra cargo onto your bike.

The main benefit of an Xtracycle is that it significantly increases the cargo-carrying capability of your bicycle, and large or unwieldy items that wouldn’t fit in a conventional rack and pannier system can be strapped on. Also, because it is permanently affixed to your bicycle, it allows you to spontaneously buy groceries, or pick up twenty library books, when you may have left the panniers or trailer at home with a conventional system.

One of the big drawbacks with this system is it doesn’t detach from the bicycle easily (it’s a major job that involves changing brake lines, extending chain, etc.). This means that your bike is permanently encumbered with this performance-limiting hardware. Wheelies, bunny hops and tight maneuvering are no longer possible. It is virtually impossible to pack a bicycle of this size into the hold of a bus or into a train.

Unlike a trailer, an Xtracycle does not remove weight from the bicycle to be supported on additional wheels. Instead, the system invites extra loading onto a frame and hardware that may be insufficient to carry this extra weight. Tire pinching, spokes popping and bearing damage can result from an overloaded bicycle. The lengthening of the bike frame further increases frame torsion stress which is aggravated by heavy loads.

A bakfiets is a bike from the Netherlands that has a large trough or box at the front, traditionally for transporting goods. Bakfiets can carry up to 175 pounds in the cargo area alone, which includes seating for two small children. Companies like Clever Cycles are making these bikes available in the U.S. There’s a blog about them here.

You may also want to look into getting an electric bike to help tow the trailer.

You can most of the trailers listed in this article from BikeTrailerShop.

The Bike Trailer Blog is devoted to nothing but bike trailers.

See this page for more information about unusual bikes.