The Pharox 300 Flame is the warmest LED light bulb I’ve tested. It’s been in a desk lamp in my living room — it gives off a pleasing yellow glow (a 3000 kelvin output). The Pharox’s light quality is very good. Unlike CFLs, this bulb contains no mercury it emits no UV radiation. Typically, quality household lights tend to have the Color Rendering Index (CRI) between 80 and 100. The Pharox has a CRI of 85.

The Pharox Flame outputs 336 lumen, and runs on 6 watts of power. Lemnis says the Pharox is equivalent to a 35W to 60W incandescent equivalent (depending on the lamp or fixture). This light also represents a kind of price breakthrough for LED bulbs — it sells for $24.99 from the manufacturer, Lemnis Lighting. 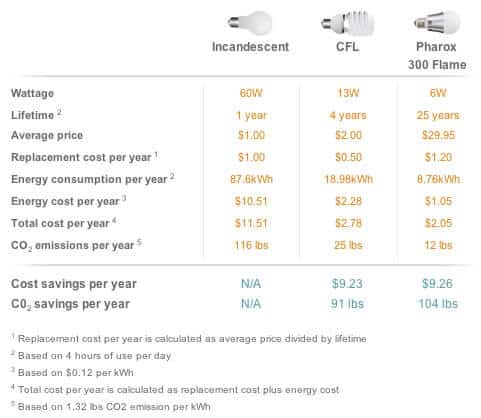 The Pharox 300 Flame Bulb is available from Amazon.