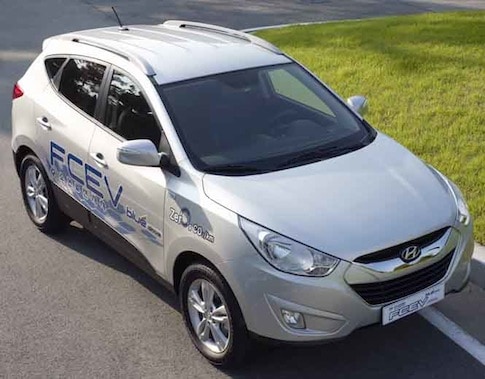 Fuel efficient hydrogen-powered Hyundai vehicles will soon be cruising Scandanavian streets, thanks to a pilot program which aims to introduce them to the European market.  Government employees in Norway, Sweden, Denmark, and Iceland will operate the test fleets of the FCEVs (Fuel Cell Electric Vehicles) under the program announced this week.

Hyundai targeted these four nations for the program largely because there is already an infrastructure in place to replenish the vehicles’ hydrogen fuel cells.  SHHP, the Scandanavian Hydrogen Highway Partnership, oversees a network of refueling stations around the region and also promotes hydrogen as a sustainable fuel source for the future.

Through its “Blue Drive” initiative, Hyundai has recently been making moves to position itself as one of the world’s foremost manufacturers of fuel efficient cars.  The FCEVs join Hyundai’s BlueOn electric car and hybrid vehicles as part of its eco-friendly fleet.  According to Woong-Chul Yang, Hyundai’s President of Research & Development, “This agreement will be a stepping stone for the Hyundai Motor Group to lead the FCEV market in Europe.”

Hyundai hopes to bring hydrogen cars to the general market by 2015.  Learn more about Hyundai and their BlueDrive initiative at their website.