Note: If you looking for AA-sized LifePO4, you can find them here.

Soon, we’ll probably be seeing Lithium Iron Phosphate (LiFePO4) batteries being used in most electric cars and bikes. This new battery type is set to dominate the market. Based upon lithium ion technology, LiFePO4 batteries offer many advantages over lithium cobalt dioxide (LiCoO2) batteries which are commonly used in laptops, mp3 players and cell phones.

In electric vehicles, LiFePO4 batteries offer greater range, power and safety. They provide full power until they are completely discharged, and recharge in just 2.5 hours. LiFePO4 chemistry is also environmentally friendly — it’s the least toxic of all the battery types.

LiFePO4 batteries were developed by Dr. John Goodenough at the University of Texas. These batteries have seen wide acceptance recently in Asian countries, but still have not made inroads in the U. S. marketplace. However, you can find these batteries being sold on eBay for electric bikes and scooters. You can now get a 52V LiFePo4 battery for an electric bike, that will give you a 65 mile range on a single charge with 60A drain rate. 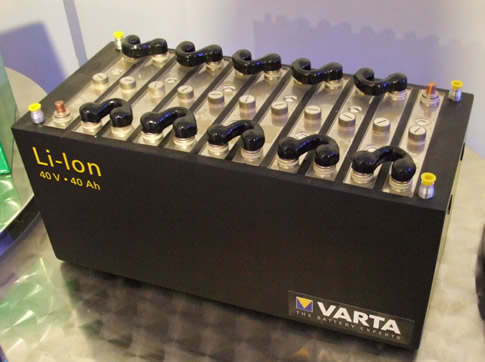 For electric vehicles and plug-in electric cars, the LiFePO4 batteries will typically perform well in temperatures up to 400-degrees F, last for 6 to 7 years at a charge-discharge cycle of over 3,000.

The biggest player in the LiFePO4 marketplace for electric vehicles, however, is A123 Systems that has teamed up with GM to develop these batteries for the Chevy Volt plug-in hybrid. Another big player is Lithium Technology Corporation who has been working with GM, Toyota and U. C. Davis to develop LiFePO4 batteries for all-electric and hybrid vehicles.

Here’s a list of all the advantages of LiFePo4 batteries:

64 thoughts on “LiFePO4 Batteries: A Breakthrough For Electric Vehicles”