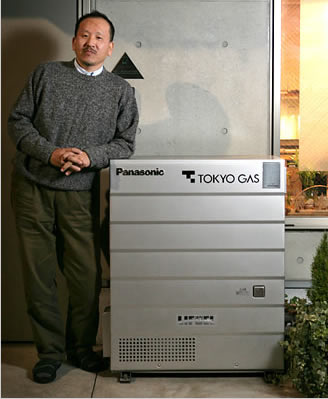 Masanori Naruse jogs every day, collects miniature cars and feeds birds in his backyard, but he’s proudest of the way his home and 2200 others in Japan get electricity and heat water – with power generated by a hydrogen fuel cell. The technology – which draws energy from the chemical reaction when hydrogen combines with oxygen to form water.

Developers say fuel cells for homes produce one-third less of the pollution that causes global warming than conventional electricity generation does. Their plain grey fuel cell is about the size of a suitcase and sits just outside their door next to a tank that turns out to be a water heater. In the process of producing electricity, the fuel cell gives off enough warmth to heat water for the home.

The oxygen that the fuel cell uses comes from the air. The hydrogen is extracted from natural gas by a device called a reformer in the same box as the fuel cell. But a byproduct of that process is poisonous carbon monoxide. So another machine in the grey box adds oxygen to the carbon monoxide to create carbon dioxide, which – though it contributes to global warming – is not poisonous.

The entire process produces less greenhouse gas per watt than traditional generation. And no energy is wasted transporting the electricity where it’s actually going to be used.

Nearly every home in Japanese cities is supplied with natural gas for cooking or heating, which could make it relatively easy to spread fuel cell technology there. The potential for widespread use of fuel cells in bigger or more sparsely settled countries is less certain. Many American homes don’t have gas service, for example.

“There are not any real show-stoppers for this technology being used in the US,” said electrical engineering professor Roger Dougal at the University of South Carolina at Columbia.

Dougal said fuel cells are no more hazardous than any stove or water heater. Their major drawback is cost.

“Ultimately, I expect that some fraction of homes will use this technology, but it will be a very long time before a sizable fraction does,” he said in an email.

Naruse is paying $9 500 (about R74 000) for a 10-year lease on a test fuel cell for his home south-west of Tokyo from Matsushita, which sells Panasonic brand products, plans to offer fuel cells commercially in 2009.

Other Japanese companies working on fuel cells for homes include Toyota Motor, which is developing fuel-cell vehicles, and electronics maker Toshiba. Automaker Honda Motor is working with Plug Power, a fuel cell company in the US, to test a home fuel cell generator that also provides hydrogen as fuel for fuel cell vehicles.

Honda hopes domestic use of fuel cell generators will help make fuel cell vehicles become more widespread because owners can refuel at home. It plans to start marketing the FCX Clarity fuel cell vehicle this year in California; it will lease for about $600 a month.

Fuel cells are expensive in part because they don’t last very long. The latest model from Matsushita, for example, lasts about three years.

But the technology is improving. Matsushita says the savings from using fuel cell-generated power will vary by household and climate, but it promises a cost drop of about $50 a month.

Naruse’s family – with three TV sets, a dishwasher, clothes washer, dryer, personal computer and air conditioner – saves about $95 a month. At the same time, conventionally generated electricity remains available to them, should the power generated by their fuel cell run low.

The Japanese government is so bullish on the technology it has earmarked $309-million a year for fuel cell development and plans for 10 million homes – about one-fourth of Japanese households – to be powered by fuel cells by 2020.

8 thoughts on “Fuel Cells Being Used To Power Japanese Homes”