A velomobile is a “bicycle car”, or more officially, a “human-powered vehicle, enclosed for protection from weather and collisions”. They are virtually unknown in the U.S., but a quite popular in some parts of Europe. Velomobiles are highly efficient commuting vehicles, especially when they are equipped with an electric assist motor. Velomobiles tend to attract a lot of attention — many riders devote at least 10 minutes of their day to answering questions from curious on-lookers. Some owners even finance their vehicles by putting advertisement on the sides of their bike. 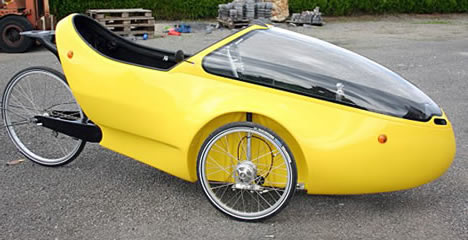 Basically, most velomobiles are single-person recumbent tricycles, covered by a protective outer shell. Often lights, turn signals and storage compartments are incorporated into their designs. The price of a velomobile is currently about $8000 and up, and often they must be imported from Europe.

Velomobiles are heavier than regular bikes — they are faster on open roads, but going up hills is more difficult. Because they are enclosed, the rider is more protected from the elements. I think one important addition to a velomobile is an electric-assist motor. Some manufacturers already offer this as an option (the Go-One for example), and the Aerorider has a built-in motor. With a motor assisting you, the weight of the velomobile becomes less of an issue, making it a more practical commuting vehicle.

A sustainable engineer, Frederik Van De Walle, has written a paper “The Velomobile as a Vehicle for more Sustainable Transportation”. Here’s the PDF file. 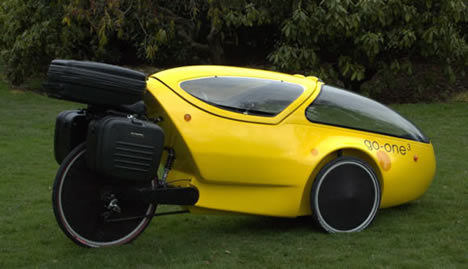 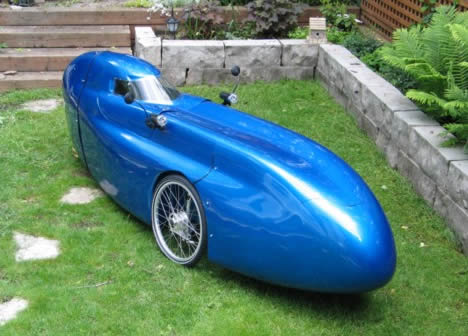 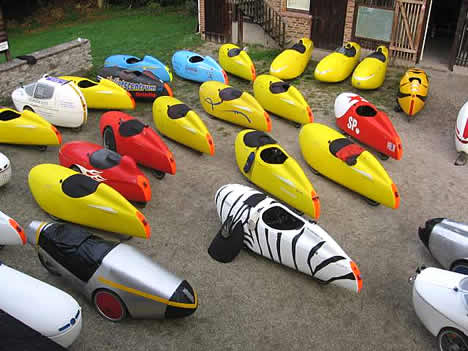 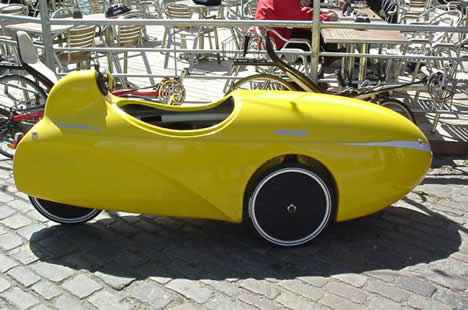 Here’s an example of a velomobile being retrofitted with a motor.

Here are some more details on Velomobile manufacturers from Wired:

Velomobiles come in two basic flavors. Partially enclosed, or “head-out” designs, such as the Quest and the Versatile, are the most popular. Proponents of these vehicles will tell you that they offer improved ventilation and are often lighter and faster than their fully enclosed counterparts.

Velomobiles that completely protect their riders from the elements, like the carbon-fiber Go-One, the Leitra and the Cab-Bike, are obviously more comfortable in the rain and snow but can suffer from fogging and icy windscreens.

In Europe, the vehicle’s primary market, the average velomobile costs between 4,000 and 6,000 euros (about $5,000 to $7,000). Importing one to the United States can significantly add to the price. Many American owners of European velomobiles paid nearly $10,000 for their vehicles. The high cost has prompted some buyers to find creative ways to finance their purchases. Many sell advertising on the highly visible vehicles, and some have been successful enough to pay for their machines two or three times over.

Thanks to Nick Hein for the tip about Velomobiles.