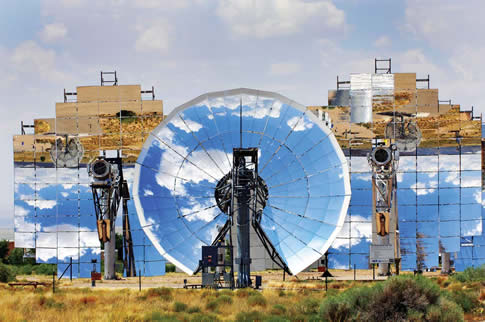 The conversion efficiency is calculated by measuring the net energy delivered to the grid and dividing it by the solar energy hitting the dish mirrors. Auxiliary loads, such as water pumps, computers and tracking motors, are accounted for in the net power measurement.
“Gaining two whole points of conversion efficiency in this type of system is phenomenal,” says Bruce Osborn, SES president and CEO. “This is a significant advancement that takes our dish engine systems well beyond the capacities of any other solar dish collectors and one step closer to commercializing an affordable system.”

Serial #3 was erected in May 2005 as part of a prototype six-dish model power plant at the Solar Thermal Test Facility that produces up to 150 kilowatts (kW) of grid-ready electrical power during the day. Each dish unit consists of 82 mirrors formed in a dish shape to focus the light to an intense beam.

The solar dish generates electricity by focusing the sun’s rays onto a receiver, which transmits the heat energy to a Stirling engine. The engine is a sealed system filled with hydrogen. As the gas heats and cools, its pressure rises and falls. The change in pressure drives the pistons inside the engine, producing mechanical power, which in turn drives a generator and makes electricity.