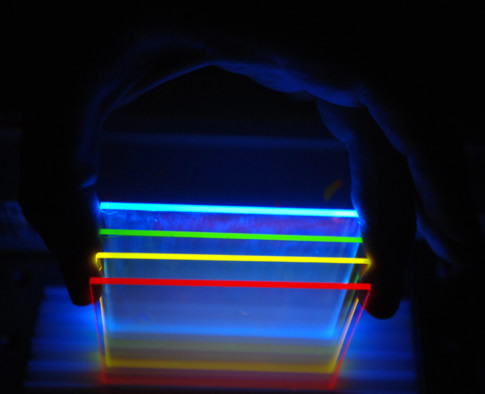 MIT researchers have announced that they have created “organic solar concentrators” that could make windows become powerful solar panels in as little as three years. The concentrator is mixture of two or more dyes painted onto a pane of glass or plastic. The dyes absorb light across a range of wavelengths, re-emit it at a different wavelength and transport it across the pane to the solar cells at the edges. Focusing the light like this increases the electrical power generated by each solar cell by a factor of 40. The advantages are twofold: the dyes greatly increase the power of solar cells, and homeowner are much more likely to incorporate solar glass into their homes.
The work was funded by the National Science Foundation and the U.S. Department of Energy’s Office of Science.

Scientists had tried using similar solar concentrators in the 1970s, but abandoned the idea when not enough of the collected light reached the edges of the concentrator. The MIT engineers revamped the idea by using a mixture of dyes in specific ratios, which allows some level of control over how the light is transmitted.

More details can be found here.

13 thoughts on “Windows That Double As Solar Panels”