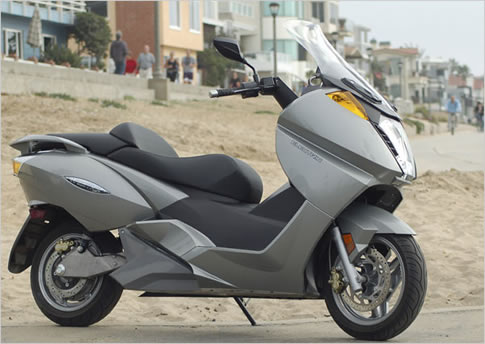 The Vectrix is a 100% electric scooter that is available for sale in the U.S. This bike goes 62 mph, has a claimed range of 68 miles, and it accelerates faster than most cars at the stoplight. The Vectrix is powered by a low-mounted, 3.7 kilowatt NiMH battery pack that re-charges to 80 or 90 percent of capacity in two hours. Three hours is usually enough for a full charge, four if you start from flat empty. 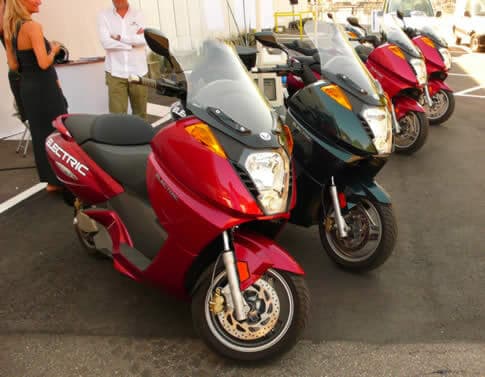 Here’s a video of the Vectrix in action:

We rode a Vectrix all over the sprawl of traffic-choked Los Angeles for a week and came away convinced. While the price of $11,850 is an awful lot steeper than a garden-variety toy scooter, this one is fully freeway-capable. Riding in the slow lane, hunkered down behind the windscreen, we were able to stay out of trouble and cruise efficiently at 62. On surface streets, we about doubled our time efficiency compared with a car, by either splitting lanes or zipping off in directions cars couldn’t go. Parking was even easier; a scooter will get you places cars don’t fit.

We pirated juice all over town. It was surprising how many electrical outlets there are in parking garages and outside buildings everywhere.

We never drained the batteries all the way, but we think the claim of 68 miles on a charge might be a little optimistic. Our regular, 22-mile, mostly freeway commute used about two-thirds to three-quarters of a full charge. It was back up to full within a few hours of poached electricity from our building’s parking garage.

The electric power cord is built right into the underseat storage and snakes out easily to reach 110- and 220-volt outlets. It draws about 15 amps, so just be sure you’re not plugged into an outlet that is also powering something important, or you’ll blow a fuse. While you can’t fully recharge in the time it takes to order lunch, you can pour in enough electrons that, with similar topping off throughout the day, you can keep enough charge in the batteries so range won’t be a problem. Usually.

Vectrix has been doing research and development for more than a decade on this ride but has been selling scooters in America for less than a year.

See also this review in the New York Times.

10 thoughts on “The Vectrix 100% Electric Scooter”