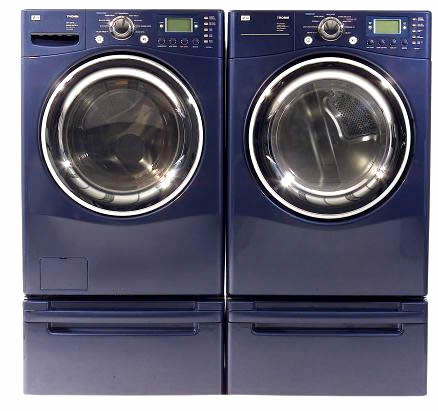 At MetaEfficient, I evaluate appliances based on a number of factors, namely: energy efficiency, effectiveness, reliability, and price. This holds true for washing machines, because all of these factors need to be considered and weighed against each other (I’d also like to include lifecycle analysis, but  there’s no information available for washers). For raw efficiency data, one can turn to the Energy Star ratings, to work out which machines use the least amount of energy and water overall. Based on the Energy Star data, the most efficient washing machines for 2008 are made by LG Electronics and Kenmore.

Three LG washers received the best Energy Star ratings, and four Kenmore washers followed very close behind the LG machines. These ratings are based on the Modified Energy Factor (MEF) which is a way to compare the relative efficiency of different units of clothes washers (higher is better). The second factor is the Water Factor which is the number of gallons per cycle per cubic foot that a washing machine uses (lower is better). Here is a listing of the highest rated washing machines according the February 2008 update:

(Model numbers often contain wildcard characters, such as *, #, and X, that are placeholders for non-energy attributes, such as color. )

In this analysis, I’m excluding Energy Star washers with a load capacity of less than 3 cubic feet, these compact machines get high energy ratings but are inefficient in their water use.

You’ll notice that all of these machines are front-loading washers, the ConsumerSearch product review guide says:

Experts generally agree that front-loading washing machines (also called horizontal-axis washing machines) are better than top-loaders. Front-loaders use a dryer-like action to tumble clothes in and out of water and detergent, while conventional top-loaders circulate clothes with some type of agitator. Because gravity is used to tumble the laundry, front-loaders are gentler on clothes and cause less tangling than top loading machines. In addition, their fast spin speeds remove more water from clothing, thereby reducing drying time and resulting in further energy savings. Because of the design, you can’t soak clothes and you have to use special low-sudsing “HE” or high-efficiency detergents. 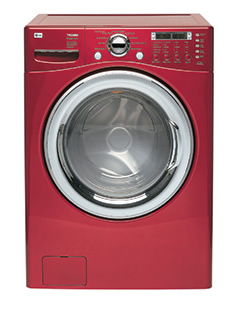 This is an innovative washer: it uses stream to wash your clothes, and this process makes it the most efficient washer available. The steam cleaning is gentle on your clothes, and tend to remove wrinkles. The washer uses only 145 kWh of energy per year, and 4,690 gallons of water per year on average. This is significantly better than conventional washers. The SteamWasher is also the largest capacity front-loading machine with 3.63 cubic feet of space. It can spin your clothes at 1200 rpm, which means you’ll save on drying energy and time. The problem with this washing machine is that it’s expensive. It has a recommend price of $1600, and most retail stores sell it for around $1400 currently. A better option might be to get a lower cost but still very efficient LG machine (see our review of one below).

In terms of reliability, ConsumerSearch says: “The LG TROMM SteamWasher hasn’t been on the market long enough to establish a reliability track record, but the J.D. Power’s major appliance study showed that LG washing machines in general have the highest customer satisfaction rating of all brands.”

The LG TROMM SteamWasher is available from Sears. 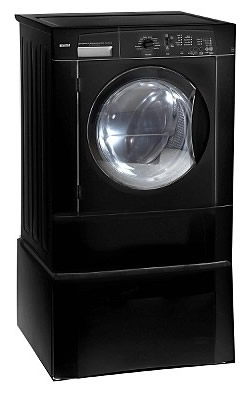 The Kenmore “High-Efficiency” washers live up to their name, and have a reasonably good track record in regards to reliability. The Kenmore machines use 69% less water and 60% less energy per load compared to conventional top load washers. They also spin at 1000 rpm, which means less energy will be spent drying your clothes.

The Kenmore front-loading washing machines are priced at $600-$900, and only available from Sears. 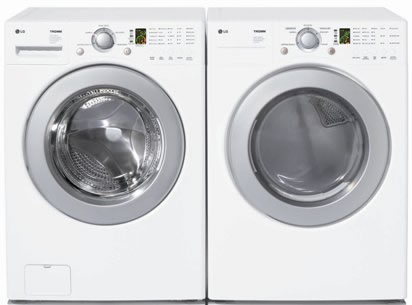 LG Electronics makes less expensive washing machines that are also highly efficient. For example, the front-loading LG WM0642HW (estimated retail $850) gets good reviews. It’s more affordable because it has fewer bells and whistles, and because it has a small door and window. The LG WM0642HW has a 3.83-cubic-foot capacity, automatic temperature control, an automatic detergent dispenser and a stainless-steel tub. A similar model, the LG WM2016C (estimated retail $780), costs a bit less, but is slightly smaller, with a smaller window.

The LG WM2016C gets a Modified Energy Factor (MEF) rating of 2.25, which is quite good — this machine will only consume 152 kWh / year, and 4323 gallons of water per year on average. That’s only 7 kWh more energy per year than the SteamWasher, and 367 more gallons of water, for half the price. Because of this, the LG WM2016C is the MetaEfficient recommendation for an efficient washing machine.

These LG washers are available from Amazon

17 thoughts on “The Most Efficient Washing Machines”