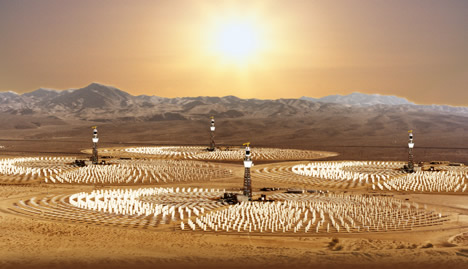 Solar power is a truly efficient source of energy, but it tends to fluctuate, and, as you might know, it turns off at night. One clever way to alleviate this intermittence is to store solar energy in the form of heat using molten salt. An aerospace company, Hamilton Sundstra, has created a venture called SolarReserve, and it plans to have its first molten salt solar power plant online by 2010.

(This picture is from eSolar, the solar thermal company Google is partnering with for its “RE Less Than C” program, but uses a similar setup as SolarReserve’s proposed plant design, with a central collection tower surrounded by heliostats.)

"The molten salt holds its heat very efficiently and for long periods of time," Dan Coulom a spokesman at Hamilton Sundstrand. Coulum said the company plans to build as many as 10 plants over the next 10 to 15 years, pulling in revenues of $1 billion over that time period. 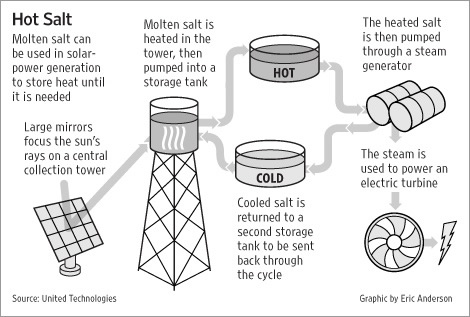 With concentrated solar, a large number of motor-controlled mirrors track the sun and reflect the solar energy onto a tower receiver, which in turn heats a liquid that can be used to make steam. A steam turbine can then produce electricity.

"The molten salt, which is in a storage tank at the bottom of the tower, is run up through the receiver and heated to about 1,000 degrees Fahrenheit," said Coulom.

The company said using molten salt, a mixture of sodium and potassium nitrate, instead of water or oil, allows the heat to be stored for use on cloudy days or at night.