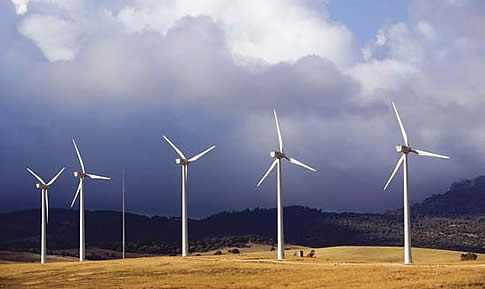 Wind power is breaking new records in Spain, accounting for just over 40 percent of all electricity consumed during a brief period last weekend. As heavy winds lashed Spain on Saturday evening wind parks generated 9,862 megawatts of power which translated to 40.8 percent of total consumption. Between Friday and Sunday wind power accounted for an average of 28 percent of all electricity demand in Spain. Spain’s wind power generation equaled that of hydropower for the first time in 2007.

In July the government approved legislation that will allow offshore wind parks to be set up along the nation’s vast coastline in an effort to boost the use of renewable energy sources. While more expensive than land-based wind farms, offshore wind parks can take advantage of stronger, steadier coastal breezes.

Spain, which along with Germany and Denmark, is among the three biggest producers of wind power in the 27-nation European Union, is aiming to triple the amount of energy it derives from renewable sources by 2020.