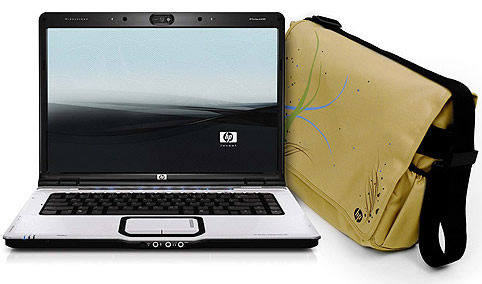 Recently, HP announced that its DV6929 laptop will be packaged in messenger bags made with 100% recycled materials. This will reduce the amount of packaging by 97% — almost all the Styrofoam and cardboard conventionally for packaging will be eliminated.

The laptop is EPEAT-silver registered, so it meets a number of green manufacturing criteria, including Energy Star 4.0 compliance. That’s not quite as good as the Gold rated EPEAT machines that we featured previously, but it’s an efficient start.

The systems are available in 1,700 Walmart stores and 594 Sam’s Club locations. If you have an old computer that you want to turn in when you buy it, the store will handle the recycling for free.

HP isn’t the only high-tech vendor stepping up its efforts to rethink technology packaging. In late August, Olympus Imaging America said it will introduce new packaging this fall with will cut out 70 percent of the plastic from its audio products packaging and 80 percent of the plastic for its xD-Picture Card. Over a year, the amount of plastic saved will be about 83 tons, according to the company. The company is converting to paperboard that is printed with soy and vegetable inks