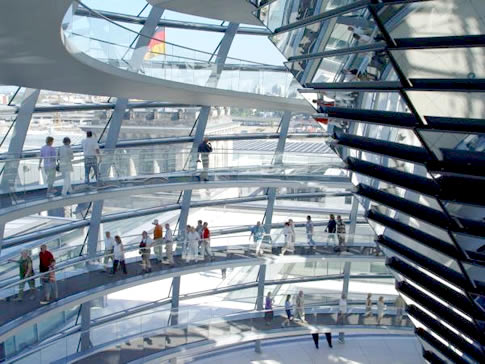 The German Reichstag is expected to become the greenest parliament building in the world, thanks to a decision to rely solely on renewable energy. From late summer the building is due to swap to green power sources such as water, wind and solar energy, replacing the conventional power that it has largely relied upon until now.

Its extensive refurbishment in the late 1990s, including the glass cupola designed by the British architect Sir Norman Foster, had already won it plaudits. Ecologists praised the building’s energy efficiency, which has led to a 94% cut in its carbon emissions. 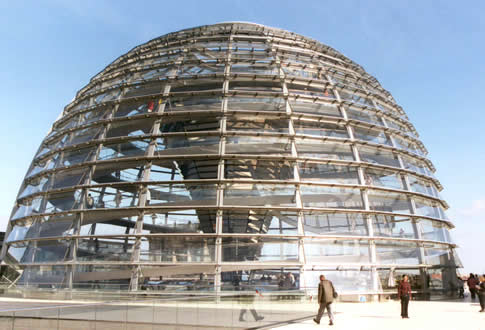 Its roof makes passive use of solar power and natural light and its thick, well-insulated 19th-century walls help retain warmth in winter and reduce the need for air conditioning in summer.

At the moment biofuel generators in the basement produce 40% of the building’s energy, for lighting, heating, the flow of air conditioning and water, while the rest comes mainly from coal and nuclear supplies.

But in future the Reichstag, which has been the home of Germany’s parliament for nine years, will go a step further, entirely abandoning conventional sources in favour of renewables, which will be provided by an outside supplier.

A parliamentary subcommittee agreed last week to seek bids from renewable energy producers to replace that conventional power use, and expects to choose a supplier by late summer.

Parliamentarians hope that the switch to clean energy will boost Germany’s reputation as one of the greenest countries in the world and help the renewable energy sector. Germany has one of the most globally successful and innovative clean energy industries. Boosted by a subsidy system, around 13% of its electricity comes from renewable power – mostly wind – a figure that is set to rise to 27% over the next 12 years.

2 thoughts on “German Parliment To Use 100% Renewable Power”