A group at MIT has unveiled a scooter that folds in half, and collapses to the size of a suitcase. The low-cost bike could be carried on a bus or stored under your desk at work. A prototype of the new design was recently unveiled at the Milan Auto Show. According to William J. Mitchell of MIT’s Smart Cities Group, “the design is all about providing a clean, green, silent electronic scooter that would provide the same kind of urban mobility as motor scooters.” 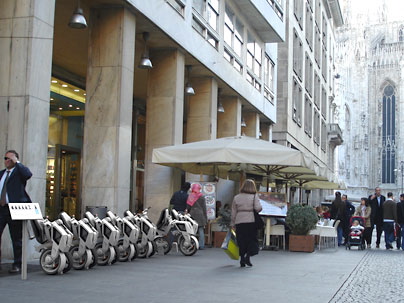 “By putting motors directly inside each of the two wheels, it’s possible to design the scooter so that it could be folded up to about half its size. When folded, it can also be easily wheeled along like a trolley suitcase, making it easy to take along on trains or even indoors,” Mitchell added.

Mitchell and his team envision the scooters being provided in racks at convenience stores, train stations and other convenient city locations as one-way rentals. Users would swipe a credit card to remove a scooter from the rack (in which its batteries would be kept fully charged up), unfold it for the trip and then fold it up again to deposit at another rack at the destination.

“The simplified design could bring down production costs significantly. A typical gas scooter has about 1,000 parts, but ours only has 150,” said Mitchell. A one-way-rental business model has been demonstrated in Paris, where a company has recently begun a similar service with 1,000 bicycles.