Bicycle City is a planned community built around bicycles. No cars are allowed. A real world cycling utopia, the project, started by Ohio-based Bicycle City LLC, has been in the design phase since the early 1990s, but in 2010 the town of Gaston, South Carolina near Columbia was chosen as the first location for Bicycle City. A community where cycling and walking are the main forms of transportation promotes a healthy lifestyle and reduces dependency on oil. In addition, Bicycle City’s vision is to build eco-friendly homes- all LEED certified- with a heavy reliance on clean energy such as wind and solar power.

The 160-acre property in Lexington County, South Carolina was chosen due to its proximity to an Amtrak station, the college town of Columbia, nearby organic and farmers’ markets, as well as the Three Rivers Greenway, an existing bike trail along the Columbia riverbanks. The area also lies between the mountains and the ocean, has access to lake recreation, and boasts mild weather for year-round riding. Citizens in this region are already embracing cycling as a way of life and are avid outdoors enthusiasts. The town of Columbia earned bronze level status from the League of American Bicyclists as a bicycle-friendly city.

The land was purchased for $1 million and while the the trail work is underway, other parts of the project are currently on hold. Co-founder Joe Mellett isn’t too concerned about a timeline though, as he says that the company is more interested in quality than in speed and size. The website is currently taking reservations for home sites. In the meantime, developers get their inspiration from other car-free communities, such as Mackinac Island. 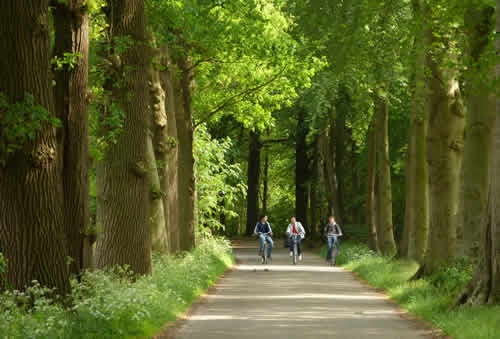 For those who would like to live in Bicycle City, but aren’t quite ready to go completely car-free, parking is planned for the outskirts of the community. The die-hard car-free enthusiasts can choose to live more toward the center of Bicycle City. You can receive a $5,000 reduction on the cost of your home if you do any of the following: grow and maintain an organic garden, bike to work, or walk to work. Emergency vehicles will still have access to homes. Visit Bicycle City South Carolina for more information.

3 thoughts on “A Town Without Cars: Bicycle City”