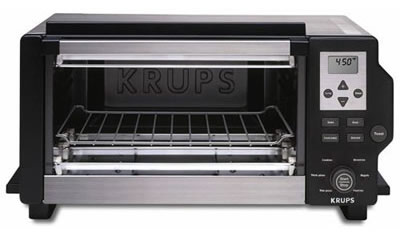 What are the best toaster ovens? Toaster ovens are efficient devices for cooking small meals. They typically use two 750 watts heating elements and draw a total 1500 watts, whereas electric ranges draw about 3000 watts (and thus require a 240 volt electric socket).

Toaster ovens also heat up more quickly, due to their smaller size. But the most efficient toaster ovens are those that incorporate a convection fan and good insulation into their design. The fan blows heated air continuously around the food being cooked, thus reducing required temperature and cooking times. On average, they cut energy use by about 20%, and cooking time is reduced by about 30%.

Food also tends to cook better because of the more even temperatures in the oven. Some owners complain that convection fans are noisy, but others say the noise is exaggerated. One reviewer on Amazon says:

There is a hum from the convection fan but it is no louder than the sound of my refrigerator compressor or my microwave when in use.

Here is our round-up of the best toaster ovens:

The best sources for ratings of toaster ovens are Consumer Reports, Cook’s Illustrated, Real Simple, and Good Housekeeping. According to the reviews, the convection toaster oven with the best rating overall was the Krups FBC2 toaster oven. Not only does this oven include a convection fan, it also sports more heating elements other toaster ovens.

The toaster has a special function where it will alternate between powering each of its quartz heating elements. Each element is brought to its full 1600 watts power, so that radiant heat is maximized. Reviewers also say this oven is easy to use and cleans up easily.

You can get it from Amazon

Avanté Elite by T-Fal is another toaster oven that was highly rated in reviews. Many reviewers commented that this compact toaster cooks very evenly due to its convection fan.

It also has a roomy interior: you can fit a 12″ pizza inside or 6 pieces of toast inside. Avanté Elite alsopreheats quickly — it takes about 3 minutes for the oven to preheat to 350 degrees.

12 thoughts on “The Best Toaster Ovens”