Juicing has long been hailed as one of the best ways to get healthy, stay healthy, and live a full, active life. (Just look at Jack LaLanne!) But to get all of the health-inducing vitamins, minerals, antioxidants and enzymes that juicing has to offer, you first have to have the best juice extractor.

Here are our picks for the best juice extractors:

There is little argument among those in the know that if you want a juicer that can stand up to even the most difficult juicing situations it is the Breville Juice Fountain Elite 800 JEXL. Want to throw in a whole apple? No problem. The Juice Fountain’s three-inch shoot makes putting whole fruits in a breeze.

Want to juice hard foods such as beets and carrots? A powerful, two-speed motor lends Breville the torque to juice even the hardest foods.

These are just a few of the reasons that Consumer Search named Breville the best overall juice extractor and Cooking.com gave it 4.8 stars.

Amazon reviewers—340 in all—gave the Juice Fountain Elite a nearly perfect score. It is available from Amazon for $275.00 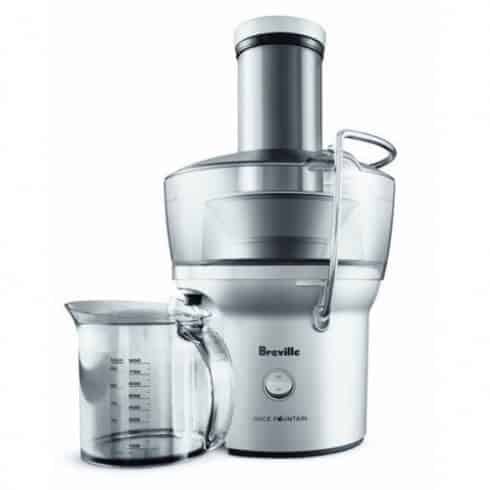 Its Cyclonic Juicing System operates at 14,000 RPMs to squeeze every last drop of juice out of your fruits and veggies. Plus, it produces results up to 10 times faster than other juices with 30 percent more yield. And, as compared to Breville’s larger version, you’ll save counter space.

It can be purchased at Amazon for $99.00, where 348 reviewers gave it nearly five stars.

Earthy Birthy Mama calls it “the only kitchen appliance you’ll ever need” because of its versatility, and the company stands behind its product, offering purchasers a 10 year warranty on motor and a five year warranty on other parts.

It received five stars from reviewers on Amazon, where it can be yours for $229.00.

The Most Earth-Friendly: Kuvings Centrifugal Juicer

The Energy Star Compliant Kuvings Centrifugal Juicer uses an energy-saving 350-watt motor that can produce speeds of up to 11,000 RPMs to continuously juice 30 to 50 cups. Even though is uses half the power of the average juicer, this machine is still able to provide three times the strength of an average juice extractor.

Its large capacity feeding tube allows for juicing whole fruits and vegetables — even ones with seeds — and, best of all it comes in two fun and funky color choices: orange or green.

And, while Kuvings is the most energy-efficient juicer, it is also the least expensive. It can be purchased at Amazon, where it received four stars, for $94.88.

3 thoughts on “The Best Juice Extractors”