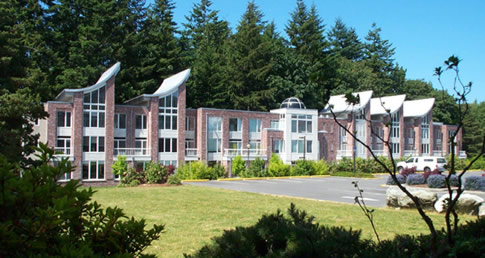 The sewer systems we use today are entirely ineffectual and unnecessary. The primary flaw in our design is that we use fresh water to dispose of feces. This is perhaps the most ineffectual thing to do with human manure — it pollutes fresh water, and it requires municipalities to maintain extremely costly sewage treatment infrastructures. Even after treatment, sewage can still wreck havoc on rivers and groundwater.

The most effective and straightforward thing to do with sewage is to compost it (or use it to produce fuel). It’s a valuable resource.

The C. K. Choi Building is a 30,000-square-foot building that is part of the University of British Columbia. The building has no connection to the sewage system. Instead it has composting toilets and waterless urinals installed.

The toilets on each of the three floors connect via stainless steel chutes to five Clivus Multrum composting systems in the building’s basement. The toilets emit no odors, because all the waste is collected in the basement and fans ensure that no odor escapes the composting containers.

The system is maintained and emptied by the Clivus Multrum company through a service contract. Every day the university maintenance staff wipes down the toilets and adds a can of wood chips or bark mulch to each toilet. Every six months, the compost (which no longer resembles feces) is removed from the system and used as a fertilizer. 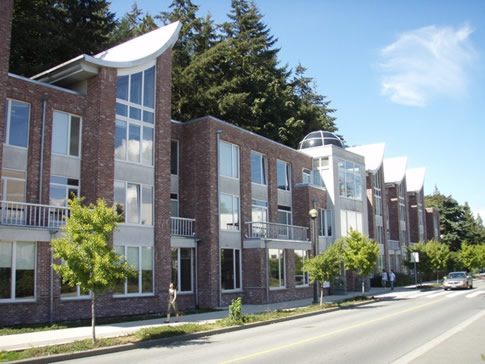 But about the water from sinks and other systems? This graywater is filtered and pumped into a 300-foot-long outdoor planter bed with lilies. The final discharge is used to irrigate plants. A test by the city of Vancouver of the fecal coliform counts of the discharged water showed that it contained less than 10 CFU per 100 milliliters (by comparison swimming is permitted in water with up to 200 CFU per 100 milliliters).

The building also captures rainwater: the rain is in a 7,000-gallon tank below a staircase. It is used to irrigate the landscape, which is bordered by thirsty ginkgo trees.

What this example clearly shows is that modern buildings can do quite well without a connection to a municipal sewage system. The maintaining the building’s composting system is probably less overall than a building with flushing toilets.

More information on this topic (including many other case studies) can be found in the excellent Composting Toilet System Book by David Del Porto and Carol Steinfeld.